A health care worker use a nasal swab to test for COVID-19 at a pop up testing site at the Koinonia Worship Center and Village in Florida. (Photo by Joe Raedle/Getty Images)

Coronavirus Global Updates: The United Arab Emirates has granted emergency use authorisation to a Chinese coronavirus vaccine, thus becoming the third country in the world to allow an under-developed vaccine to be injected into its citizens. Boris Johnson’s government closed a coronavirus testing facility so the site can be made available to handle customs checks after the U.K. leaves the European Union’s single market and customs union.

While Japan’s economy is picking up slowly, New Zealand will endure a shallower recession than previously expected but the coronavirus pandemic will have a longer impact on the country’s finances, according to government projections. Israel’s cabinet backed a second national lockdown, while gatherings in the U.K. will be restricted as new cases climb at a pace not seen since May.

Vaccine may be ready within a month: Trump

President Trump again raised hopes — and concern — about swift US approval for a coronavirus vaccine, saying the shot could be ready within four weeks. “The previous administration would have taken perhaps years to have a vaccine, because of the FDA and all the approvals,” Trump said. “We’re withing weeks of getting it. You know, could be three weeks, four weeks.”

Apple Inc. and the Singapore government have partnered on a two-year health initiative dubbed LumiHealth, which is built around tracking and rewarding user behavior through the Apple Watch gadget and an iPhone app. As part of the plan, Singapore residents will be able to earn as much as S$380 ($280) by completing goals and tasks set within the app. Goals can be accomplished by walking or doing other exercises like swimming or yoga, and the LumiHealth app will offer personalized coaching and reminders for health screenings and immunizations.

Thailand will start issuing special visas to foreign tourists starting in October. Prime Minister Prayuth Chan-Ocha’s cabinet approved a proposal to issue visas to tourists planning to stay between 90 and 280 days in Thailand. The tourists will undergo a mandatory 14-day state quarantine on arrival at partner hotels or hospitals and follow health and safety regulations. A group of people, some wearing masks pose for a photograph with decorations at an entrance to a upmarket mall in Bangkok, Thailand (AP)

The UK government warned that coronavirus tests could soon be further restricted as laboratories struggle to cope with rising demand, in a blow to businesses seeking to get more workers back to the office. Health Secretary Matt Hancock said on Tuesday he would “not shirk from decisions about prioritization” and resources would be focused on hospitals and care homes — a comment that suggests community testing will be reduced if demand continues to grow. The minister said he believed the problems in the system would take “a matter of weeks” to resolve. 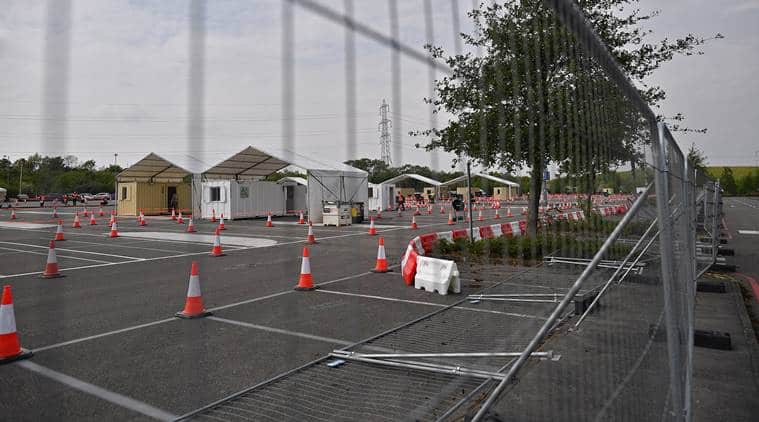 Japan said on Tuesday it has committed 17.2 billion yen ($165 million) in funds for its participation in the World Health Organization’s COVID-19 vaccine programme. The programme, known as COVAX, is aimed at helping buy and fairly distribute vaccination shots against the novel coronavirus around the world. But some countries which have secured their own supplies through bilateral deals, including the United States, have said they will not join. The funds are part of a 1.64 trillion yen reserve intended to bolster the government’s response to the virus, a government document showed.

Researchers monitoring Pfizer Inc.’s giant trial of an experimental Covid-19 vaccine have reported no safety problems even after more than 12,000 people received their second of two doses. The trial, now targeted at enrolling 44,000 people, has reached its initial goal of 30,000 subjects, Pfizer executives said. The trial is comparing two shots of the vaccine Pfizer is co-developing with Germany’s BioNTech SE to two doses of a placebo. A pedestrian wearing a protective mask passing in front of Pfizer Inc. signage is reflected outside the company’s headquarters in New York, US

AstraZeneca’s US trial remains on hold pending review by FDA

AstraZeneca Plc’s Covid-19 vaccine study remains paused in the US pending a regulatory review of an incident in which a U.K. study participant became ill, federal officials said. Trials resumed in the U.K. over the weekend and restarted in South Africa on Tuesday. Multiple news reports in the US media said the National Institutes of Health (NIH), the US counterpart of Indian Council of Medical Research (ICMR), had launched its own investigation into the incident that had led to the halting of the trials of the AstraZeneca vaccine two weeks ago. 1.22pm EDT 13:22 Boris Johnson, when asked if the government had eased lockdown too quickly, suggested discipline in adhering to social distancing restrictions had slipped. He...
Read more
Corona News

Coronavirus live updates: Majority of Americans concerned that vaccine will be approved too quickly

September 18, 2020 at 5:30 AM EDTPuppy prices doubled during Britain’s lockdown LONDON — The cost of a puppy in Britain more than...
Read more
Corona News

1.22pm EDT 13:22 Boris Johnson, when asked if the government had eased lockdown too quickly, suggested discipline in adhering to social distancing restrictions had slipped. He...
Read more

Coronavirus live updates: Majority of Americans concerned that vaccine will be approved too quickly

September 18, 2020 at 5:30 AM EDTPuppy prices doubled during Britain’s lockdown LONDON — The cost of a puppy in Britain more than...
Read more

“It was a reckless action to send a child — a teenager — to school who was covid-positive,” Attleboro Mayor Paul Heroux (D)...
Read more
Load more

Zlmbio is your news, entertainment, music fashion website. We provide you with the latest breaking news and videos straight from the entertainment industry.

Coronavirus live updates: Majority of Americans concerned that vaccine will be...

Parents in Massachusetts sent their son to Attleboro High School even...